Aging is one of the first, important and unavoidable experiences in human life. There are various theories describing the cause of aging. Most of them are purely biological. It seems that the fundamental, real cause of aging as a phenomenon is more likely to be thermodynamic. The aging process is continuous, consecutive change of the state of the biological system caused by the general tendency of entropy to increase. All biological, morphological, and structural changes occur as a consequence of the entropy rise. The same cause forces an object, bacteria, and a human to age. It is the fundamental natural (Thermodynamic) laws that makes us and surrounding objects, and in general, the whole Universe to change the system’s state and to get older. (1)

Entropy is thus the parameter that is related to all others and describes aging in the best manner. In the beginning, entropy change appears as a consequence of accumulation of matter (growth). Later, decomposition and configurational changes dominate, as a consequence of various chemical reactions (free radical, decomposition, fragmentation, accumulation of lipofuscin-like substances…)(2)

Entropy is one of the most important concepts in physics and in information theory. Informally, entropy is a measure of the amount of disorder in a physical, or a biological system.
It is a parameter that characterizes the chaotic motion of particles.
It is manifested by a degree of molecular, atomic and ionic disorder or chaos.
The higher the entropy of a system, the less information we have about the system. Hence, information is a form of negative entropy.(3)

Entropy characterizes the average amount of information contained in a given subject.
In dissipative biological systems, entropy and its variation between order and chaos is the main driver of aging process.

System destruction/death in biological systems occurs in two cases:
0. At zero entropy – the system rushes to a point.
1. When the entropy is close to 1, the system dissipates.
The range between 0 and 1 represents a narrow entropy gradient which is dedicated for life.

A lower rate of entropy production permits the organism to live longer and allows for more metabolic work. The rate of aging and maturation are apparently related to the rate of entropy production of the whole system: aging is related not only to how much metabolic work is performed but to how well the work is done, in entropic terms. Maximum entropy may correspond to death. (4)

How to measure the Information (Entropy) of body systems?

Existence, nature, and function of a coherent state far from thermodynamic equilibrium in biological systems is an essential condition for the existence of life. This state is excited and sustained by energy supply.

What are the sources of formation of the dynamic EMF in living organisms?

A combination of biophysics, molecular biology and informatics is unraveling the mysteries in “physics of life” via the subtle electric forces manifesting as a footprints of the material body.

Molecules normally possess different charge moieties, and thus small electromagnetic field patterns arise during molecular vibration. These patterns can now be measured best within the optical part of the spectrum – much less in the lower terahertz till kHz and lower Hz. Finally, EMFs facilitate quantum informative processes in coherent domains of molecular, charge and electron spin motion. This helps to coordinate such manifold and intertwined processes going on within cells, tissues, and organs (6).

There are at least three levels of electrical systems in higher plant and animal organisms.

Studies have shown that the regularity of changes in the electric field during physiological and pathological processes is an important characteristic of vital processes and pathology.

It turned out that the pathological findings are accompanied by a higher degree of disorder (entropy) in the dynamics of the electric field.

There is cumulating evidence about supreme role of entropy involved in aging and the onset of disease.

Biological systems are intrinsically ordered universes of biochemical, electromagnetic, and gravitational interactions in constant flux. The components of such complex organisms oscillate about steady state systems to maintain global equilibrium. Coherence, cooperativity, and the congruence of oscillatory frequencies and trajectories of biological micro components essential to retain physiologic homeostatic signal transductive coupling mechanisms are maintained through interatomic communications networks. Yet, an imperfect material body always subsists with a certain amount of disorder, inherently in possession of configurational and electrodynamic entropy. (8)

Measuring entropy in living systems opens up a new tool for maintaining homeostasis, delaying the onset of diseases and slowing down the aging process.

"ERI qlife" is one of the first cloud software systems to measure and correct entropy in biological systems using artificial intelligence.

Entropy is measured via an ultra-sensitive antenna which a person holds in hand during scanning and is connected to the computer. It records a subtle electric emission radiated from cells, tissues, organs, and molecules (hormones, enzymes, neuropeptides, etc.) The electric emission contains a large amount of information about the structures and metabolic processes within the cells and in the extracellular matrix. The micro-electric field is analogous to a footprint of the matter and its dynamics. 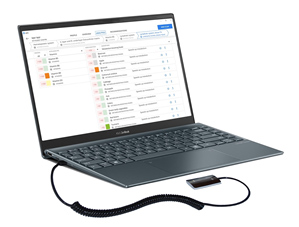 “ERI qlife” leverages modern technologies to digitize recorded micro-electric field and compare it with reference values of healthy organisms. Based on that it reveals the main deviations in relation to particular organs and body systems. The coherency (low entropy) or incoherency (higher entropy) of the micro-electric emission is in a direct correlation with health, pathology and the aging process.

What enables ERI qlife to analyze the data?

The evolution of Artificial Intelligence, machine learning, and natural language processing has allowed the inventors of ERI-AA to develop algorithms based on semantic analysis enabled to extract relevant information from digitized micro-electric emission. It is a powerful tool in the analysis of big data of different origins.

„Advancing algorithms, increasingly powerful computers, and data-based practice have made machine-driven semantic analysis a real thing with a number of real-world applications.

Discover the meaning of colloquial speech in online posts

ERI software records and analyses digital patterns of the dynamic micro-electric field and its level of coherency or incoherency. Once Artificial Intelligence in ERI software detects high level of incoherency related to pathology, it calculates and subsequently generates a complementary correcting signal. The correcting signal is aimed to restore coherency of micro-electric emission to renew the so-called non-local connection between cells. Here we are touching quantum mechanics of biological systems which say: Biological quantum systems show effect of non-local interactions at the levels of atoms, molecules and cells. There is a pattern of high degree of coherence of micro-electric emission in healthy organs. The coherency represents non-local connection between cells which keeps optimal information density of the given system.(10)

“ERI qlife” is able to renew optimal levels of coherency and information density of a huge number of processes in the body including autophagy, apoptosis and other intra- and extra-cellular regulations and vital processes related to aging and pathology.

The only patented AI technology which:

The technology is certified according to EU standards and available for practical usage. ERI software is downloaded from the cloud to any computer and the ultrasensitive antenna is delivered to the client by mail.

Principles of the technology:    https://bit.ly/ERIaiEN